We’ve lived n NE LA for almost (gulp)12 years  and I absolutely love finding new areas to explore, especially when they are so close to home.

Case in point, the LA River bike path which proved to be something of a revelation. Sure we’ve driven over the river many 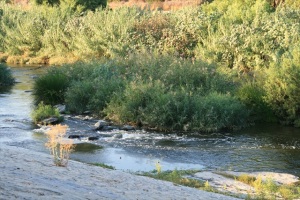 times but it mostly looked like a grotty cement gully.

However we were in a peddling frame of mind this weekend & with a 20% gas hike this week we had no desire to drive far.

We chose to enter at the “Heron Gate” located on Fletcher drive and take the path south which is almost completely flat, this is very important for little legs, with training wheels.

It’s a delightful ride and I was astonished by the rapidly moving water even in October, when we haven’t seen major rainfall in 6 months. The quantity and variety of wild life was also surprising. We saw Ducks, herons, egrets, kingfishers & Moore hens as well as a red tailed Hawk that circled for much of the ride.

Mile markers are helpfully painted on the path so the children could proudly boast with accuracy that they had cycled 5 miles (2.5 each way).

back when we realized that 5 year old legs contending with training wheels had exceeded their limit.

The bike path does have a rail long it but I would be nervous with a toddler on a trike if peddling themselves as they could quite easily roll under.

Some of the streets that run behind Riverside drive are pretty rundown (as well as industrial) so not an area I’d want to spend time after dark, but by day the path was well trafficked by a steady flow of bikers, bladers & walkers all of whom were pleasant and smiley.

Next time we will head north up towards Griffith Park

I'm a freckly red head, originally from London now living in LA with 2 pale children. Frankly with our coloring we have no business being such an outdoorsy family and living in southern California. I grew up in a time when factor 8 sun milk was considered the best protection available to combat the hot rays of a holiday in southern Spain, that lead to 3rd degree burns and the rest of the vacation spent in the shade of our apartment. As a family we love to be outside, going to the beach, camping, swimming & hiking. We can't completely avoid the sun (nor should we) but taking sensible measures to avoid unnecessary UV damage is a priority. How do we do that? By staying in the shade in the middle of the day, wearing sun protective clothing (that's why I created Sunny Sleevez), a broad brimmed hat, UV rated sunglasses, using chemical-free broad spectrum sun screen on exposed areas & eating a healthy diet with as few chemicals as possible & lots of antioxidants.
View all posts by sunnysleevez →
This entry was posted in Out and About with Family, Travel, Uncategorized and tagged bicycle, bike LA, biking, cycling, fletcher drive, LA River. Los Angeles, Los Angeles River Project. Bookmark the permalink.